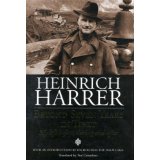 The Austrian climber and explorer Harrer first made a name for himself as a member of the group which made the first successful ascent of the treacherous north face of the Eiger in 1938. He is, however, better known for his escape from incarceration in British India during World War II, fleeing to Tibet, and spending subsequent years in Lhasa, in the company of the Dalai Lama. His Tibetan exploits, leading up to the invasion of the Chinese in the 1950’s, are told in his famous book, and more recently a film, “Seven Years in Tibet”.

In “Beyond Seven Years in Tibet”, Harrer takes the reader through his whole life story, from his early days as a skier and mountaineer in Austria, the “Nazi” slur that has followed him since the Eiger climb, and his post-war career as a writer, explorer and broadcaster. It’s a fascinating story of an incredibly full life, albeit in a bygone age, before much of the world was opened up to mass tourism.